Controller options in Nintendo switch are plenty. Recently, Powera also announced the launch of the Spyro themed controller. It will have a new design. It will have features of the previous PowerA controllers as well. 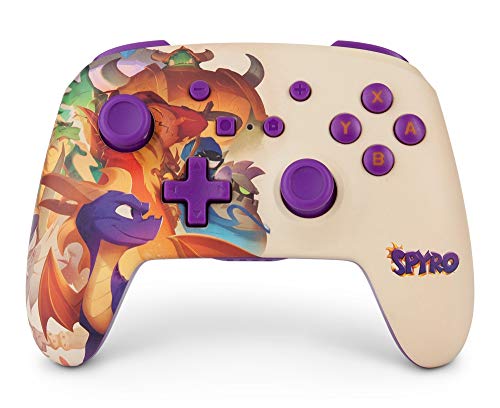 The Powera Nintendo Switch controller is currently open for preorders. Amazon is accepting orders for the wireless controller. The release date is of August 30, which means that even if you order now, you will not have to wait for an extended period. Also, the Spyro Reignited Trilogy game will release on September 3 for Nintendo. The controller will be in time for that launch. That is why it is the perfect combo if you enjoy Spyro games.

When you look at the power source of the controller, it will work on 2 AA batteries. It offers 30 hours of gameplay. The quality of the controller in itself is going to be pretty sturdy. The ergonomic design of the controller will make it easy to use. It also offers a low battery indicator on top. The player indicator will be available at the bottom. The standard button layout means that there is no learning curve involved to use the controller.

The latest Spyro Reignited game has already released for PS4 and Xbox One. Owing to this very reason, the controller by powera coupled with the launch of the game, will allow Nintendo to catch up. Powera has been relatively successful with its previous controllers. Since this time around Powera is coinciding the launch of the controller with the game release on Nintendo, it has a higher chance of releasing a controller which can generate brisk sales.

The design of the controller is already making waves in gaming communities. It is aesthetically pleasing.

The game, on the other hand, is also expected to be a hit. The visual standards of the new game are even better than the predecessors. Nintendo Switch fans are eagerly waiting for this game to be launched on the console. The controller by powera is a cherry on top.

Spyro themed controllers in the gaming world are few and far in-between. When you specifically look at Nintendo Switch, there are none right one. That is why Powera has got an enormous opportunity to grab more market share with this exclusive controller. If you are a Spyro fan, then this controller is definitely for you.