For a high-powered gaming computer, you need some high-powered motherboards to make sure the rest of your parts all work well together.

Thankfully, there’s no better motherboard than the ASUS Republic of Gamers Maximus Z690 Extreme Glacial LGA 1700 E-ATX, and this article is going to tell you why.

The ASUS Republic of Gamers Maximus Z690 Extreme Glacial LGA 1700 E-ATX motherboard comes in both the ‘Extreme’ and the ‘Extreme Glacial’ editions, and while the review is going to focus mostly on the glacial edition, we’d be remiss if we didn’t run down the extreme editions to clarify the differences.

What Are The Differences Between the ‘Extreme’ and the ‘Extreme Glacial’ Versions Of The Motherboard?

Hardware-wise, both boards perform identically, and they come with almost all of the same hardware features. For the Extreme Glacial version, you simply get an included Monoblock- which is a part that is designed to cool down your CPU as well as your VRMs (voltage regulator modules).

While both of these items are designed to run hot and also have been designed with heatsinks and fail-safes in mind to prevent overheating, having a monoblock might be worth it if you plan on pushing your machine to its limits and also having a very hot form of power delivery.

Otherwise, most of the differences are cosmetic. A mix of LED lights and the thick monoblock on the Extreme Glacial version covers most of the internal workings of the motherboard to give it a smooth and almost futuristic look.

For the extra water cooling feature, you will need to pay $1,999 dollars for the Extreme Glacial, and $1,099 for the Extreme. Regardless of whichever one you wind up purchasing, you will get a very high-end motherboard that runs well and will allow you to play on and power an equally high-end gaming PC.

What Other Features Does The Extreme Glacial Have?

Let’s take a look at the Extreme Glacial in detail All of the hardware is going to be very helpful for gamers who like to use their PC as a base for plugging in a lot of USB chargers and having a lot of devices attached to it. It also comes with four USB 3.0 Ports as well, which allows you even more space.

It also is amazing looking, and once you get it hooked up and installed to your chassis, it will look smooth and like it belongs there, especially if you pair it with some other high-end PC parts.

In terms of the RAM, it offers 4800 MHZ of RAM, which is almost double the average. Additionally, it supports overclocking at 6400MHZ as well, and supports 128GB of memory.

So for those people who want to play some amazing games, play them well, and have those games running on the highest graphics imaginable, then this is the motherboard for you.

Also, keep in mind that this motherboard is much much larger than typical motherboards you might find in less expensive computers. It is 12 x 13 inches, or 305 x 330mm, which is pretty wide, and you want to take all of this into account before you buy your case or other parts.

There’s nothing worse than dropping a few grand on this motherboard and then finding out that your case isn’t big enough!

Additionally, you will get your workout in because you will be lifting 6 pounds worth of a monoblock, the motherboard, and an armor back plate. Until you wait for your new case and parts to arrive, you might be better off using the Extreme Glacial motherboard as an Extreme dumbbell!

At $2,000 retail, even with all the features, you need to consider the price point. Especially if you are looking at getting equally high-end parts for your other PC parts as well, getting the Extreme Glacial motherboard can put a very large dent in your wallet, but if you’ve got the money and truly demand the best of the best, you can make it work and justify it.

There are boards on the market that can give you some of the same features, such as the different networking options, connectivity options, and even the ability to connect two GPUs with four-slot NVlink support.

You can even buy the extreme version of the Z690 LGA 1700 E-ATX motherboard and sacrifice the water cooling board for almost $1000 dollars off the retail price.

But if you are planning on building a high-end PC, then you’ve probably got the price points figured out anyway, so don’t be afraid to build the computer of your dreams and make sure it can do everything you want it to do. 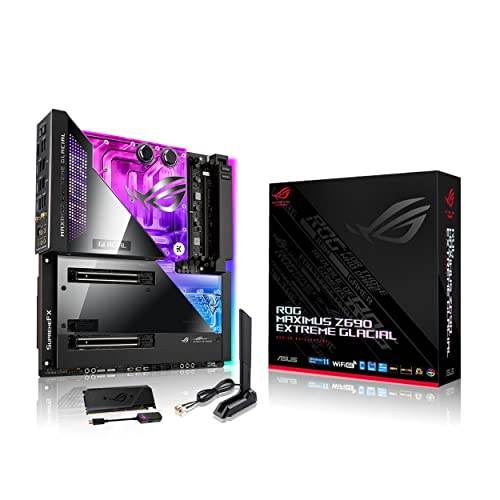 Can I Make Do With Just The Extreme Version? If you are looking for the best motherboard on the market, then you need to get the Extreme Glacial version. However, if you are willing to sacrifice the included monoblock and some of the smoother features and LED lights, you can make do with the Extreme version.

Really the biggest difference is going to be the price point, so if you are looking to save a lot of money, then you can get the extreme version and know that it is going to be a very good motherboard for your needs.

What Other High-End Parts Should The Z690 Extreme Glacial LGA 1700 E-ATX Motherboard Support?
If you need a good motherboard, then you probably have some good parts to go with it.

The Z690 Extreme Glacial LGA 1700 E-ATX Motherboard can support the 12th Gen Intel core processor and it is also ready to support Windows 11 as well.

You can also get the Intel Core i9-12900K Desktop Processor 16, which will work well with the powerful motherboard.

Now, it is a hot and heavy CPU that is going to power your computer and probably also keep you cool in the winter with how much heat it ends up giving off.

However, since you want the best of the best for your computer, then you will see that the i9 from Intel is going to be perfect for your gaming needs.

If you get the Intel Core i9-12900K, then you will need to grab the Extreme Glacial motherboard option, as well as every other cooling solution you can get your hands on, because it will run very hot.

You might also snatch up a Samsung 980 Pro 1TB SSD Memory Card, which does help you have some high power efficiency and a high-performance bandwidth for your high-performing system.

Thankfully, while it does run hot, it can come with a heatsink option and also comes made with a nickel coating to help mitigate problems that are caused by the heat.

There are a lot of powerful computer parts that will work just fine with your new Extreme Glacial motherboard. If you are serious about buying the best gaming computer that money can buy for you, then make sure every single part is pushing the limit. You will find that the Extreme Glacial Motherboard can more than carry the load.

With an included monoblock as well as an internal system that will push your computer and the surrounding parts to perform at their best, the ASUS Republic of Gamers Maximus Z690 Extreme Glacial LGA 1700 E-ATX Motherboard is going to be a perfect system for everyone who wants to have it all when it comes to computer gaming and playing your favorite video games and watching your favorite content.

Don’t let the price deter you, and know that once you buy this motherboard, it is going to last you for a very long time.

It is an investment that will provide you a lot of support both during the short term, while also holding its own in the long run as well. You won’t need to go rushing to buy the next big thing in gaming hardware for a very long while.